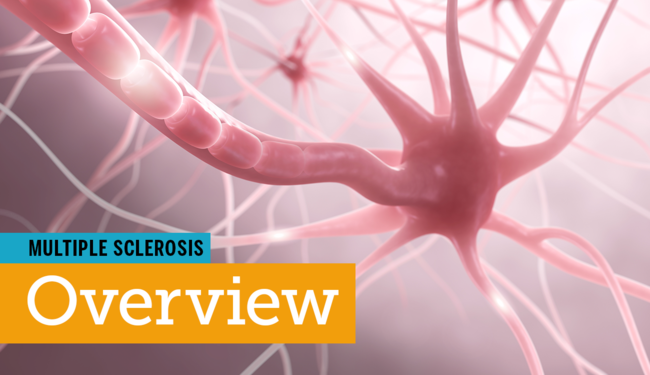 Multiple sclerosis is a chronic disease of the brain and spinal cord, also referred to as the central nervous system or CNS. MS can be treated, but there is no cure. Symptoms vary among people with MS, but motor and cognitive problems are among the most common. Most people with MS eventually develop some degree of disability. MS is very rarely fatal, and on average, people with MS have similar life spans as people without MS.

In MS, sections of the brain and spinal cord become damaged and form scar-like lesions or plaques that are visible on magnetic resonance imaging (MRI) scans. The lesions cause MS symptoms by interfering with nerves’ ability to relay messages from the brain to the body and vice versa. The course of disease progression is unpredictable.

MS is an autoimmune disease. In other words, the damage in MS is caused by the body’s immune system attacking its own tissues. Specifically, the immune system attacks myelin, a fatty tissue that lines and insulates nerves, and sometimes attacks the nerves themselves. As myelin is destroyed and the nerves degenerate, signals become slower and less effective, and disability accumulates.

The History of MS

European writings as early as the 1300s describe cases of what we now understand to be multiple sclerosis. Through the centuries, doctors attempted to treat MS by injecting gold, silver, and mercury, as well as parasites and toxic compounds containing strychnine and arsenic.

In the 19th century, doctors began to adopt modern scientific methods in testing and proving ideas. In 1868, Dr. Jean-Martin Charcot, a professor of neurology at the University of Paris, examined a patient with MS symptoms. After she died, Charcot performed an autopsy and found MS plaques on her brain. Charcot made the connection that the plaques caused the symptoms, and dubbed MS la sclérose en plaques, which is still the term for MS in French.

In 1916, thanks to innovations in staining cells for microscope study, Dr. James Dawson at the University of Edinburgh observed that inflammation and damage to myelin were involved in the MS disease process. In subsequent years, scientists began to understand how the nervous system worked, using electricity to send signals. It became clear that demyelinated nerves – such as those damaged by MS – were dysfunctional.

The National MS Society was formed in the United States in the late 1940s and began funding multiple sclerosis research. One of its first grants went to Dr. Elvin Kabat at Columbia University, who was the first to identify the immune system as being connected to MS damage. Still, during this time period, many doctors believed that MS was caused by problems with blood circulation, and many treatments focused on this idea.

After World War II, researchers learned more about MS by studying the medical records of soldiers with MS. Meanwhile, advances were made in understanding details of how the immune system works and how nerves send electrical signals.

In 1965, the National MS Society funded a panel of MS experts led by Dr. George Schumacher to publish guidelines for MS diagnosis. Concurrently, Dr. John Kurtzke developed a rating scale for MS disability still in use today. The first valid scientific trial for MS, which led to establishing corticosteroids as an effective treatment for acute MS relapses, took place in 1969.

MS diagnosis improved with the invention of computed axial tomography (CAT) scans in the 1970s and leaped ahead with the advent of MRI technology in the 1980s. MRI also proved an incredibly powerful tool to help scientists learn how MS progresses. Most importantly, MRI gave researchers a window into how effective new MS treatments were in slowing the rate of CNS damage.

In the 1990s, rapid advances in computer science enabled researchers to study DNA and understand genetic factors in MS. Computers allowed doctors and scientists to share data on MS and analyze thousands of patient histories of people with MS to gain insight into disease symptoms, progression, and treatment effectiveness.

Symptom management medications and modern disease-modifying treatments (DMTs) clinically proven to reduce flares and slow the progress of MS began reaching the market in the 1990s and early 2000s, and more continue to win approval. Clinical trials continue the search to find new and better treatments, and, ultimately, a cure for MS.

How Common Is MS?

Approximately 2.3 million people around the world and 400,000 in the United States have MS. About 10,000 new cases are diagnosed in the U.S. each year. MS has a strong geographic pattern, becoming more common the farther an area is from the equator. Women are about twice as likely as men to develop MS. MS is more common among people of European descent than in other ethnicities. Multiple sclerosis is most commonly diagnosed between the ages of 20 and 50 but is sometimes diagnosed in children and older adults.

How Does MS Progress?

Nearly everyone diagnosed with multiple sclerosis experiences disease progression. MS progresses in different patterns or disease courses. However, no matter what type of MS someone has, the disease progresses when autoimmune attacks cause new or worsening damage to the central nervous system. Often when someone with MS begins experiencing new or worsening symptoms, an MRI will reveal corresponding new or larger lesions on the brain or spinal cord. However, there may be symptoms without visible changes on MRI scans, or there may be MRI evidence of progress but with no worsening experienced by the person with MS.

Doctors track MS progression in two ways: via MRI scans and by Kurtzke’s Expanded Disability Status Scale (EDSS). The EDSS takes into account weakness, tremor, difficulty swallowing or speaking, vision, and problems with bowel or bladder function, but it focuses on walking as the main determinant of disability.

Can you die from MS?
Multiple sclerosis is very rarely a fatal condition. For the most part, people with MS enjoy similar longevity as people without MS. On average, the life span of a person with MS is about seven years shorter than that of other people. Most people with MS die of the same conditions other people die of, such as cancer and heart disease. It is only in very rare, severe cases of MS with extremely rapid progression that MS is the cause of death.

How is MS diagnosed?
Doctors diagnose MS with a combination of detailed patient history, MRI scans, and laboratory tests. It can take time to receive a definitive diagnosis, and many people receive incorrect diagnoses before finding out they have MS. Learn more about the MS diagnosis process.

What are the symptoms of MS?
MS symptoms vary widely between types of MS and between people. Many of the most common MS symptoms involve motor and cognitive difficulties. Learn more about MS symptoms.

How is MS treated?
The most important treatments for MS are disease-modifying treatments (DMTs). DMTs have been proven in clinical trials to reduce the number of disease flares and slow the progress of MS. Symptom management medications can improve MS symptoms, and corticosteroids are effective at relieving acute disease flares. Learn more about MS treatments.