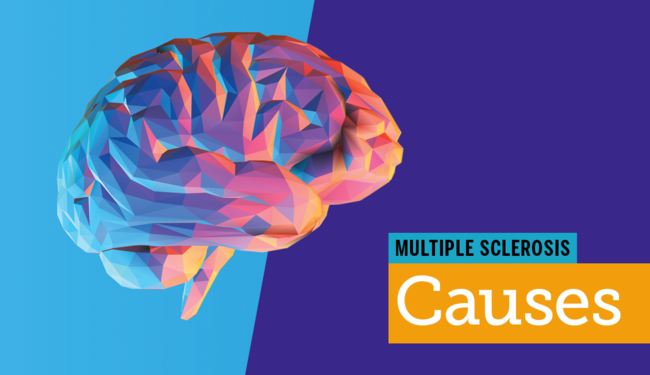 The cause of multiple sclerosis is unknown. Scientists have proven that MS is autoimmune in origin – in other words, the damage in MS is caused by the body’s immune system attacking its own tissues – but they have not yet solved the puzzle of why this process begins. Autoimmune attacks in MS are specifically directed at the nervous system, the myelin that sheathes nerve fibers of the spinal cord, brain, and optic nerve, which make up the central nervous system, or CNS. Multiple sclerosis damages the myelin sheath and sometimes the nerve cells themselves, leading to MS symptoms like vision problems, spasticity, and muscle weakness.

It is important to note that while science is good at finding correlations, or apparent relationships, between factors and disease, correlation does not prove that the factor causes the disease. Many risk factors for MS have been identified and are being studied, but none have been pinpointed as the cause of MS.

Multiple sclerosis does not appear to be directly inherited from parents in any clear genetic pattern. However, people with a parent or sibling who has MS do have a higher risk for developing the disease themselves. An average person’s risk for developing MS is 0.1 percent. If one parent has MS, their child has a risk between 2 percent and 5 percent of developing MS. In identical twins, if one twin is diagnosed with MS, the other twin has between 20 percent and 31 percent chance of developing the condition. Research to better understand hereditary predisposition for MS is ongoing.

Women are about twice as likely as men to develop MS. In general, autoimmune diseases strike women at much higher proportions than men. In the U.S., 75 percent of those with an autoimmune disease are women. Women’s immune systems are believed to be more effective than men’s, giving women greater protection from infections, but making them more vulnerable to autoimmune disorders.

Ethnicity may influence MS predisposition. It was long believed that MS was more common among people of European descent than in other ethnicities. Newer research shows MS occurring at similar rates across most other ethnicities but indicates that people of different races may experience MS symptoms differently. Members of a few ethnic populations, including Inuit, Aboriginal Australians, and the Maori people of New Zealand, virtually never develop MS.

Researchers have identified a wide array of environmental factors linked to the development of multiple sclerosis. One of the most striking of these, and among the first to be discovered, is geography. The farther a place is from the equator, the more common MS is there. Conversely, MS is very rare in areas near the equator. Similarly, the farther from the equator someone lives, the earlier they begin experiencing MS symptoms. If a person moves from a lower-risk latitude to a higher-risk latitude in childhood, their risk for developing MS rises accordingly. Moving from a high-risk to a lower-risk area in early life decreases overall risk.

The geographic difference in risk for MS has led scientists to study links between vitamin D and MS. Since people nearer the equator get more sunlight throughout the year, their skin makes more vitamin D. Studies have established a link between low levels of vitamin D and the development of MS. Current research is exploring whether vitamin D supplementation can help those who already have MS or prevent the disease from developing by supplementing vitamin D in childhood.

Some researchers connect the geographic factor with diet. Populations in lower-risk areas tend to live nearer the ocean and consume more fish. Fish such as salmon, mackerel, herring, and sardines are rich in vitamin D as well as omega-3 fatty acids, which are believed to reduce inflammation. Conversely, people who live far from the sea tend to consume more foods containing saturated fats, such as red meat, butter, and cheese. Diets high in saturated fats have been connected to increased inflammation.

Past or present cigarette smoking makes a woman at least 1.6 times more likely to develop MS, and risk rises with the number of packs per day. Studies also show that MS progresses more rapidly in those who currently smoke.

Several studies have investigated specific viruses for links with MS. Some scientists believe that one or more common viruses such as the Epstein-Barr virus (EBV - the cause of mononucleosis, or “mono”), varicella zoster (a herpes virus responsible for chickenpox and shingles), human herpes virus-6 (HHV-6, cause of roseola), and the measles virus may cause genetic changes in some people, paving the way for the development of MS.

Researchers have found a correlation between head trauma received between ages 10 and 20 and later development of MS. Those who had suffered concussions were more likely to have MS as adults. Multiple concussions further raised the risk.

One study in Finland found that people born in spring had a higher risk for developing MS. The researchers theorized that women pregnant during the winter received less vitamin D from sunshine, and the lower levels of vitamin D in the womb may have predisposed their children to develop MS.

Can MS be prevented?
Since we do not yet know what causes some people to develop multiple sclerosis, there is no certain way to avoid getting the disease. Some risk factors, including genetic predisposition and where a person grew up, are beyond anyone’s control.

If you are concerned that you may have a high risk for developing MS, focus on lowering your risk by changing the factors within your control. If you smoke, stop smoking. Ask your doctor to test your levels of vitamin D to determine whether you may benefit from supplements. Add foods rich in vitamin D and omega-3 fatty acids to your diet and cut out saturated fats. Spend a few minutes in the sunshine each day. These changes may or may not help prevent MS, but they are likely to improve your overall health.

Is MS contagious?
No. MS is not contagious in any way.

Can stress cause MS?
A massive study of more than 200,000 people showed no connection between high stress levels and increased risk for developing MS. However, stress is proven to be a common trigger for relapse in those who have already have MS, perhaps because stress keeps the immune system activated.

I suffered 3 months of mononucleosis when I was in jr.high. was told that the infection had dropped the blood barrier in my cerebral and allowed my anti immunity into my brain and spine. It knew… read more

Multiple Sclerosis - The Path to Diagnosis

If you have multiple sclerosis (MS), you may find it difficult to talk about problems with...

If you have multiple sclerosis (MS), you may find it difficult to talk about problems with...
read article >

Building Spirituality Into Your Life With MS

Having a chronic illness like multiple sclerosis (MS) means facing the premise that your life may...

Building Spirituality Into Your Life With MS

Having a chronic illness like multiple sclerosis (MS) means facing the premise that your life may...
read article >

Have you attended any of the MyMSTeam online socials yet? If not, no worries! MyMSTeam will be...

Have you attended any of the MyMSTeam online socials yet? If not, no worries! MyMSTeam will be...
read article >

Multiple sclerosis (MS) may cause altered sensations on the skin. Although rare, some people with...

Multiple sclerosis (MS) may cause altered sensations on the skin. Although rare, some people with...
read article >

Making the Most Out of Your Provider Visits for Multiple Sclerosis

As part of your MS care, you may have to follow up with many different members of a health care...

Making the Most Out of Your Provider Visits for Multiple Sclerosis

As part of your MS care, you may have to follow up with many different members of a health care...
read article >

Medicare for Multiple Sclerosis: An Overview

Medicare is the federally sponsored health insurance plan in the United States that covers adults...

Medicare for Multiple Sclerosis: An Overview

Navigating Multiple Sclerosis With Your Family

Navigating multiple sclerosis (MS) with your family can be a challenge. The condition may be...

Navigating Multiple Sclerosis With Your Family

Navigating multiple sclerosis (MS) with your family can be a challenge. The condition may be...
read article >

Multiple sclerosis (MS) is an autoimmune condition. In autoimmune diseases, the immune system...

Multiple sclerosis involves the dysfunction of the immune system, leading to an autoimmune attack...

Multiple sclerosis involves the dysfunction of the immune system, leading to an autoimmune attack...
read article >

MS-Related Foot Drop: Everything You Need To Know

Foot drop refers to a condition where a person is unable to lift the front part of their foot to...

MS-Related Foot Drop: Everything You Need To Know

Foot drop refers to a condition where a person is unable to lift the front part of their foot to...
read article >