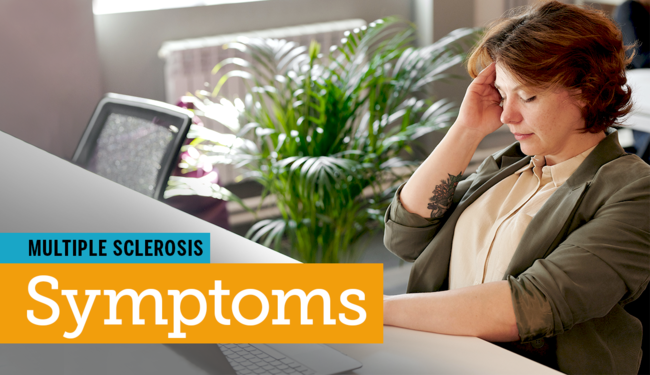 Multiple sclerosis attacks the central nervous system (CNS), which is made up of the brain and spinal cord. MS symptoms are caused by damage to the myelin, a fatty substance that insulates the nerves, and to the nerves themselves. When myelin is destroyed, nerve signals become slower and less effective. Communication between the brain and the rest of the body is impaired. Since the brain directly or indirectly controls most bodily systems, MS symptoms can impact a wide array of senses and functions.

Which MS symptoms a person experiences depend on which parts of the CNS are damaged. Most MS symptoms fall within the broad categories of motor symptoms, cognitive symptoms, and symptoms that affect other aspects of the body.

Motor problems are common MS symptoms that can severely impact mobility and quality of life. Difficulty with walking (also referred to as gait) is especially challenging. Weakness, slowness, muscle tightness or spasticity, and balance problems contribute to gait difficulties and raise the risk for falls and injury. Doctors use the word ataxia, meaning loss of full control over bodily movements, to describe these changes.

Between 25 percent and 40 percent of people with MS develop speech problems. Speech issues often develop later in the disease course and worsen with fatigue. Common speech problems in MS include dysarthria (slurring) and dysphonia (low speaking volume) as well as stuttering. Similarly, many people with MS may develop dysphagia, or trouble swallowing. Dysphagia raises the risk for choking or inhaling food or drink, which can lead to lung infections.

Less common motor symptoms may include breathing problems – if MS affects muscles or nerves in the chest – and tremors.

Fatigue is one of the most common MS symptoms; about 80 percent of people with MS experience fatigue severe enough to impact their daily activities.

MS often affects the optic nerves, causing inflammation known as optic neuritis. Optic neuritis can cause blurring, graying, pain or difficulty with eye movement, a dark spot in the visual field, or blindness in one eye. MS can also cause double vision and nystagmus, or abnormal eye movements.

Changes in physical sensation such as numbness, tingling, or pins-and-needles prickling sensation (referred to as paresthesia) are very common in people with MS. Paresthesia may occur in the face, body, or arms and legs. The sensation may be mild enough to be ignored, or so severe that it becomes difficult to walk, eat, or write, depending on which body part is affected.

Dizziness and vertigo are common in those with MS. These sensations are sometimes described as feeling light-headed, or that the room seems to be spinning.

MS can cause emotional changes such as mood swings, irritability, and sudden bouts of intense laughter or crying (known as pseudobulbar affect) that do not reflect the person’s actual feelings. Depression is very common among those with MS.

About 55 percent of people with MS have experienced significant pain at one time, or on a chronic basis.

As many as 80 percent of people with MS experience bladder dysfunction, which can lead to incontinence, urinary tract infections, and kidney problems. Bowel issues, especially constipation, are common in those with MS.

Less commonly, MS can cause seizures, itching, and loss of hearing.

What Are the Early Signs of MS?

MS begins differently for each person. For many people, vision changes and paresthesia are among the first symptoms to be noticed. Others notice changes to their gait or balance, or another motor problem. Some people experience multiple symptoms at once.

Women are about twice as likely as men to develop MS, and the genders may experience MS in different ways. Studies have shown that men are more likely to have a progressive course of disease, and to accumulate disability more quickly than women. While men with relapsing types of MS have fewer relapses, the relapses they have are more likely to impact motor function than sensory function. However, overall, women and men tend to reach disability milestones at similar ages.

Research shows that for some women, MS symptoms worsen during menstrual periods and after menopause. During pregnancy, MS symptoms may improve.

What symptoms lead to a diagnosis of MS?
MS cannot be diagnosed based on symptoms alone. The process of diagnosing MS can take months or years. Diagnosis is based partly on damage shown on MRI scans over time. Before reaching a diagnosis of MS, doctors must rule out all other conditions that could potentially cause the symptoms.

At what age do most people first experience MS symptoms?
MS is most commonly diagnosed between the ages of 20 and 50. MS is diagnosed less commonly in older adults and rarely in children. Some people ignore MS symptoms for years before reporting them to their doctor and beginning the process of diagnosis. It is also possible for MS to cause “silent” damage to the CNS for years before any symptoms become noticeable. Read more about how MS is diagnosed.