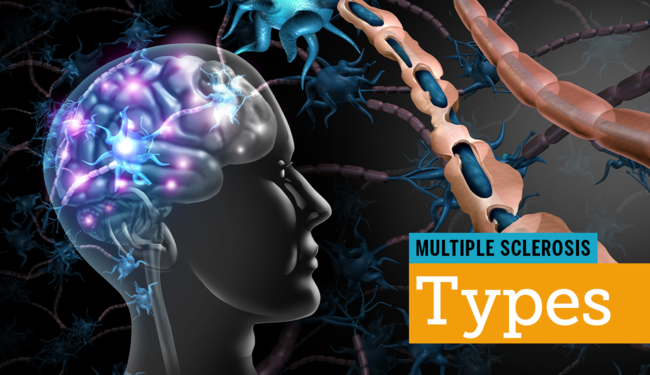 Multiple sclerosis proceeds in different patterns or courses depending on how it first appears and then progresses. Each course is a different type of MS. It is common to be diagnosed with one type, and later, if the course of the disease progression changes, to be given a new diagnosis based on those changes.

Doctors identify the different types of MS in large part based on the results of magnetic resonance imaging (MRI) scans, which show lesions (also called plaques or scars) made on the brain or spinal cord by autoimmune attacks. Scores on the Expanded Disability Status Scale (EDSS) are also taken into account as a measure of disease progression. Some doctors and researchers disagree about what the different types of MS are, or how to define them.

Clinically isolated syndrome is not a type of MS, but a condition that may or may not progress into MS. Many people who go on to develop MS are initially diagnosed with clinically isolated syndrome. CIS means that a person has had one episode of neurological symptoms lasting at least 24 hours and caused by inflammation or demyelination (loss of myelin, the fatty substance that insulates nerves in the brain and spinal cord). The episode may be monofocal, with one sign or symptom caused by a single lesion, or multifocal, with several signs or symptoms caused by multiple lesions. If older lesions are found during an MRI on someone with CIS, a diagnosis of MS may be made without waiting for additional episodes to occur. Some people with CIS never experience another episode of symptoms, and never get another lesion; they remain diagnosed with CIS.

A related term is radiologically isolated syndrome (RIS). In RIS, a lesion is found during an unrelated MRI scan, but there are no MS-like symptoms. Like in CIS, a person with RIS is not diagnosed with MS, but may be at risk for developing MS in time.

Relapsing-remitting MS is the most common MS disease course. Between 80 percent to 85 percent of people with MS are diagnosed with this type. Women are two to three times more likely to have RRMS than men. Most people with RRMS are diagnosed in their 20s or 30s. RRMS tends to cause more brain lesions than spinal cord lesions, resulting in increased cognitive and visual symptoms.

RRMS has a clear pattern of relapses (also called flare-ups or exacerbations) and remissions. During relapses, disease activity flares, causing new or more intense symptoms. New lesions may appear. During remission, people with RRMS may recover fully or partially, and symptoms may lessen, disappear, or remain permanent. The disease does not appear to progress during remission.

RRMS may be further described as being "active" or "not active" based on MRI scans, and "worsening" or "not worsening" based on disability testing. These descriptions help doctors decide whether or not treatment is effective, and if more aggressive treatment is warranted.

People diagnosed with RRMS are encouraged to immediately begin long-term maintenance treatment with a DMT to reduce the frequency and severity of flares and delay disease progression.

Many people with RRMS will eventually transition to secondary progressive MS.

About 15 percent of people with MS have PPMS. PPMS affects men and women at equal rates. People with PPMS are most often diagnosed in their 40s and 50s.

In PPMS, the disease generally progresses without clear relapses or remissions. Neurological function and disability worsen over time. PPMS tends to cause more spinal cord lesions than brain lesions, resulting in increased motor symptoms such as difficulty walking. Over time, PPMS may be further described as being "active" or "not active" based on MRI scans, and "with progression" or "without progression" based on disability testing.

Currently, Ocrevus (Ocrelizumab) is the only medication approved by the Food and Drug Administration to treat PPMS.

An older, related term is progressive-relapsing MS (PRMS). PRMS was previously considered to be a separate diagnosis, but since 2013 it has been viewed as a subset of PPMS. In PRMS, there are clear periods of acute relapse, but the disease progresses between relapses without remission.

People who are initially diagnosed with RRMS and whose disease course transitions to a pattern of progressive worsening of neurologic function and increased disability may be rediagnosed with secondary progressive MS. People with SPMS may continue to experience disease flares associated with inflammation as with RRMS, or flares may give way to a more steadily progressive course. Like PPMS, SPMS may be further described as being "active" or "not active" based on MRI scans, and "with progression" or "without progression" based on disability testing. In cases where SPMS is active and progressing, doctors may recommend more aggressive treatment.

Several DMTs are indicated by the Food and Drug Administration to treat relapsing forms of MS, which include SPMS with a relapsing course. Mavenclad (Cladibrine), Mayzent (Siponimod), and Novantrone (Mitoxantrone) are the only drugs specifically approved to treat SPMS.

The concept of benign MS is a controversial one. While some people with MS experience a comparatively mild disease course, developing little or no disability, 10 to 15 years must pass before the disease type can be referred to as benign based on EDSS scores. Benign MS is not a diagnosis given as an initial diagnosis, but more correctly an assessment of the disease pattern after many years.

About 1 in 4 people who have been assessed as having benign MS eventually convert to SPMS at some point. Doctors differ on their opinion of the value of a benign MS diagnosis. While some may feel that a benign diagnosis means it is safe to stop treatment with DMTs after a certain number of years without progression, others feel that it is not a meaningful basis for treatment decisions.

A related term occasionally used is burned-out MS. A person whose disease progression significantly slows after many years may be described as having burned-out MS.

Pediatric MS, or MS diagnosed in people under 18, is extremely rare, accounting for 3 percent to 5 percent of MS diagnoses. The disease course in pediatric MS is similar to that of RRMS in adults. On average, children with MS experience relapses two to three times more frequently than adults with early-stage RRMS. Children with MS are treated with DMTs.

Fulminant, malignant, and Marburg MS are terms are used by some researchers to describe particularly severe, rapidly progressing courses of MS-like disease. Some doctors do not consider this rare condition to be a type of MS at all, but a separate, isolated disease. The Marburg course is seen mainly in children and younger adults, and often causes death within one year.

Very similar to mine. I've started having balance and visual symptoms. I consider myself very fortunate that I'm pretty functional still..

posted about 1 month ago

The Relief of an MS Diagnosis

Being diagnosed with primary progressive multiple sclerosis (PPMS) came as both a shock and a...

The Relief of an MS Diagnosis

Being diagnosed with primary progressive multiple sclerosis (PPMS) came as both a shock and a...
read article >

Live Q&A: Ways to Get Relief From MS Fatigue, Stress, and Pain With Dr. Boster

Live Q&A: Ways to Get Relief From MS Fatigue, Stress, and Pain With Dr. Boster

3 Positives That Have Come From My MS Diagnosis

After living with multiple sclerosis (MS) for the past seven years, I’ve learned that it can be...

3 Positives That Have Come From My MS Diagnosis

After living with multiple sclerosis (MS) for the past seven years, I’ve learned that it can be...
read article >

How I Deal With the Mental Symptoms That Come With MS

When I was first diagnosed with multiple sclerosis (MS) in 2014, I expected some of the physical...

How I Deal With the Mental Symptoms That Come With MS

When I was first diagnosed with multiple sclerosis (MS) in 2014, I expected some of the physical...
read article >

Living with primary progressive multiple sclerosis (PPMS) for the past several years has...

Living with primary progressive multiple sclerosis (PPMS) for the past several years has...
read article >

While some researchers have linked multiple sclerosis (MS) to cardiovascular dysfunction, debate...

IBD and Multiple Sclerosis: Is There a Connection?

Many people with multiple sclerosis (MS) face challenges from other chronic conditions...

IBD and Multiple Sclerosis: Is There a Connection?

The Impact of Multiple Sclerosis on Emotions and Quality of Life

The emotional toll of living with multiple sclerosis (MS) can have a major impact on a person's...

The Impact of Multiple Sclerosis on Emotions and Quality of Life

The emotional toll of living with multiple sclerosis (MS) can have a major impact on a person's...
read article >

My Perspective: Winning the Daily Battle

This title almost seems as though it’s setting us up for failure, doesn’t it? It creates the...

My Perspective: Winning the Daily Battle

This title almost seems as though it’s setting us up for failure, doesn’t it? It creates the...
read article >

Steps To Lessen the Impact of Multiple Sclerosis

Steps To Lessen the Impact of Multiple Sclerosis