Why and How To Track CIS Symptoms 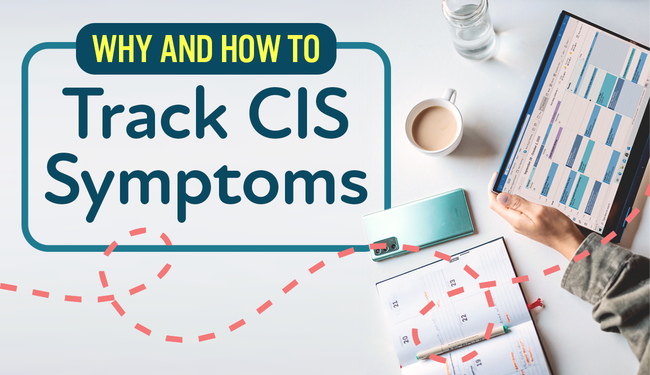 If you’ve been diagnosed with clinically isolated syndrome, it’s vital to keep track of any symptoms that may be related to your neurological condition. Studies have shown that more than 85 percent of people diagnosed with CIS eventually progress to a diagnosis of multiple sclerosis. If you have had CIS, it’s important to recognize potential symptoms, track your symptoms, and report them to your neurologist as soon as possible to determine whether your neurological condition is progressing.

Why Is It Important To Track Symptoms of CIS?

CIS is diagnosed after one clinical episode of neurological symptoms that last 24 hours or longer. These symptoms are associated with at least one area of damage (lesion) on the myelin sheath that covers nerve cells in the central nervous system, as shown on magnetic resonance imaging (MRI) scans. This destruction of the myelin sheath is referred to as demyelination. CIS can consist of a single neurologic symptom, called a monofocal episode, or multiple signs or symptoms, which is called a multifocal episode.

If a second episode of neurological symptoms occurs, or new damage becomes visible on MRI, relapsing-remitting multiple sclerosis (RRMS) is usually diagnosed. Research is mounting that starting treatment for MS as early as possible has benefits for long-term brain health. Tracking symptoms can be a vital part of recognizing disease progression and getting early treatment.

Read more about CIS vs. MS.

Understanding the Risk for Progression To MS

People with CIS and brain lesions visible on MRI similar to those seen in MS have a 60 percent to 80 percent chance of having a second clinical episode and being diagnosed with MS within several years. Using the details of your specific case and medical history, your neurologist can help you understand your individual risk for progression to MS after a CIS episode.

Symptoms of MS vary widely depending on which part of the central nervous system (brain and spinal cord) or optic nerve is affected by inflammation and demyelination. MS symptoms can include:

How To Track Symptoms After CIS

There are many different ways to keep track of how you are feeling and to note any new or worsening neurological symptoms. Try different methods and keep using the tool or technique that works best for you.

Multiple Sclerosis Trust recommends people with MS keep a symptom diary with details about how they feel, what they eat, and any stressors or other factors relating to well-being. The same approach can work for those diagnosed with CIS. The diary can help you track how you feel from week to week, so you can update your neurologist on symptoms experienced since your last medical visit.

If you already keep a diary, you could begin adding a section with health details. If you don’t already keep a journal, you could download and print this symptom tracker worksheet from the National Multiple Sclerosis Society.

Use a Symptom Tracking App

Researchers have found that using smartphone apps or activity trackers can help people with MS better self-manage their condition. These tracking apps can also help you monitor your health after CIS. A wide array of health-related apps allow you to easily track mood, sleep, diet, and physical activity.

Let your neurologist know right away if you experience any new symptoms or worsening of existing symptoms. They may order a new brain MRI scan or other tests to establish whether this represents a second clinical event and whether your CIS may be developing into the early stages of MS.

Learn as much as you can about CIS and MS so you can better recognize symptoms. You can read more articles on MyMSTeam, or visit the websites for the National Multiple Sclerosis Society or the National Institute of Neurological Disorders and Stroke. You can also ask your doctor which resources they recommend.

It can also help to talk to other people who are going through similar experiences. As one member of MyMSTeam wrote, “I’m going to visit my friend who was recently told he may have CIS. He’s having symptoms so similar to mine. I’m hoping to cheer his day through such a scary time.” When you join MyMSTeam, you gain an active, supportive community of people who know what it’s like living with CIS and MS.

Have you been diagnosed with CIS? How do you track your symptoms? Comment below or start a conversation on MyMSTeam. Other members may benefit from hearing about your experiences.

Brian T. Horowitz is a graduate of Hofstra University in New York with a B.A. in English. He is a longtime health and technology journalist. Learn more about him here.