Clinically isolated syndrome is a first episode of neurologic symptoms caused by demyelination and inflammation in the central nervous system. These neurologic symptoms, similar to those of multiple sclerosis, must last at least 24 hours with no accompanying fever or infection for CIS to be diagnosed. In people who have experienced CIS, MRI findings may show a lesion on the brain or spinal cord like those seen in MS.

To better understand the difference between CIS and MS, MyMSTeam sat down with Dr. Jacqueline Nicholas. Dr. Nicholas is a fellowship-trained MS specialist and board-certified neurologist who directs the OhioHealth Multiple Sclerosis Center and MS research in Columbus, Ohio. 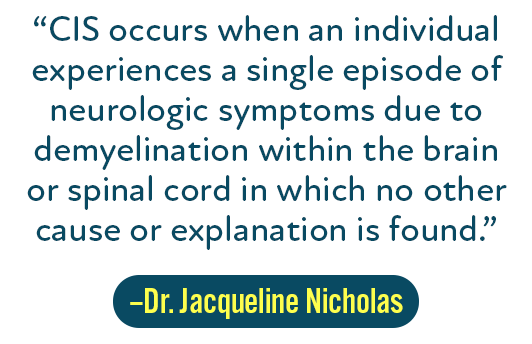 “CIS occurs when an individual experiences a single episode of neurologic symptoms due to demyelination within the brain or spinal cord in which no other cause or explanation is found,” Dr. Nicholas explained.

“We perform an extensive evaluation to review the patient’s story of their symptoms, which need to have lasted 24 hours or longer, perform a mimics work-up — including labs, MRI, and sometimes a lumbar puncture for spinal fluid evaluation — to clarify the diagnosis. A special criteria called the 2017 McDonald Criteria are used to determine if the patient has CIS,” Dr. Nicholas added.

According to the 2017 revisions to the McDonald diagnostic criteria for MS, when CIS is accompanied by MRI evidence that another episode has occurred, the diagnosis of MS can be made. The presence of oligoclonal bands in a person's cerebrospinal fluid can also help make the diagnosis.

An episode of CIS can be followed by partial, full, or no recovery. Some people who experience CIS may never have another occurrence of neurologic symptoms.

The International Advisory Committee on Clinical Trials of MS considers CIS one of four main MS disease courses. CIS becomes definite MS when a second occurrence of symptoms or a worsening of lesions happens — or both.

How Is Clinically Isolated Syndrome Diagnosed? 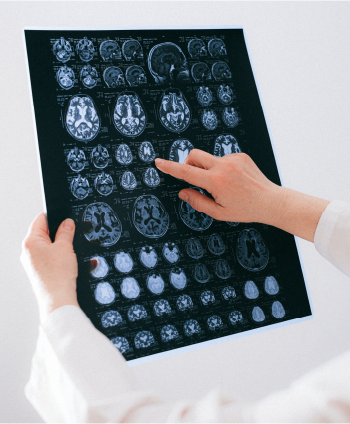 Dr. Nicholas explained that since the 2017 revisions to the McDonald Diagnostic Criteria for MS, “fewer individuals are actually being diagnosed with CIS because the criteria were updated to allow people [with MS] to get the diagnosis earlier.”

Diagnosing CIS essentially requires ruling out any other potential diagnoses, such as other autoimmune diseases or vitamin deficiencies. Once these are ruled out, then a doctor can be more confident in a diagnosis of CIS or MS.

The process of diagnosing CIS and MS are similar. One key difference is the singular nature of CIS. If more than one neurologic event occurs, it results in a diagnosis of multiple sclerosis. An MRI scan is used to confirm the presence, number, and location of lesions on a person’s brain or spinal cord.

The short answer is maybe. Some people may go on to develop relapsing-remitting MS (RRMS); some may not. RRMS is the most commonly diagnosed type of MS. About 85 percent of initial MS diagnoses are RRMS.

You may be at a higher risk of developing MS if, at the time of CIS, you have multiple lesions on your initial MRI. If this is the case, there is a 60 percent to 80 percent chance that you will develop MS over time. In other words, you are more likely to experience a recurrence of neurologic symptoms or have follow-up MRIs which discover more lesions.

Is There a Treatment for Clinically Isolated Syndrome?

At the time of onset of your initial relapse when you are diagnosed with CIS, your doctor may recommend a course of high dose corticosteroids given intravenously or orally in an effort to help speed your recovery. In addition, based on your risk of developing MS, your neurologist may recommend starting a disease-modifying therapy (DMT) to reduce the chance you will experience future relapses or new lesions on MRI. These therapies can also reduce disability progression.

Some CIS symptoms resolve without treatment. Whether or not your neurologist recommends starting treatment, and which treatment they recommend, depends on your risk level for a second occurrence of neurological symptoms.

If your CIS is determined to be low risk for a recurrance, it may be treated with short-term corticosteroids. When taken for longer periods, corticosteroids can cause serious side effects, like cataracts, osteoporosis, diabetes, and Cushing’s syndrome.

As Dr. Nicholas explained, “MS is a disease that will cause new damage to the brain and spine over time if it's untreated.”

“Even if somebody doesn't feel comfortable starting treatment at the time of CIS due to the possibility that they may not go on to develop MS, there are ways of monitoring them so that we don't just wait until something else bad happens,” she said. Monitoring with regular MRI scans is one option.

If your doctor determines you’re at a high risk for developing MS, evidence suggests treating CIS with disease-modifying drugs reduces the chance of experiencing new relapses and new lesions on MRI, and delays disease progression. CIS is considered a relapsing form of multiple sclerosis. Several disease-modifying therapies are approved by the U.S. Food and Drug Administration (FDA) to treat relapsing forms of MS. DMTs recommended for people with high-risk CIS may include:

There are other therapies for relapsing forms of MS. However, due to risks, these are only indicated if a person had an inadequate response to other disease-modifying therapies.

Early CIS Treatment May Be Beneficial

In 2010, the McDonald diagnostic criteria for MS were amended. This update recognized CIS as the first clinical event before MS, rather than as a unique condition. These updated criteria allowed for the earliest possible diagnosis and initiation of treatment. The 2017 updates to the diagnostic criteria allow an even earlier MS diagnosis if a person’s symptoms fit the description of the condition.

“The McDonald criteria allow people to get the diagnosis earlier,” explained Dr. Nicholas, “so that we aren't delaying treatment and allowing people to accumulate more disability while waiting to initiate MS disease-modifying treatment.” There are several reasons early treatment is often encouraged.

Ample data supports the theory that early treatment provides the best outcomes for symptom management, nerve damage, and disability. When it comes to CIS, early treatment appears to prevent or delay a second neurologic event — after which a CIS diagnosis becomes MS — and future relapses.

These clinical trials also found that the more lesions a person had earlier in their disease course, the higher the likelihood their MS would progress to disability after 20 years. A 2014 clinical trial of Aubagio (Teriflunomide) in people with CIS further supported the importance of treatment to delay additional relapses as early as possible in the disease process.

“Ultimately, MS will declare itself,” said Dr. Nicholas. “Oftentimes we can make the diagnosis of MS after an initial diagnosis of CIS, when someone is found to have a new lesion on subsequent MRI monitoring, before somebody actually has a new relapse.”

Evidence suggests that more damage than previously thought occurs during the first episode of neurological symtpoms (CIS) and early stage MS. In fact, disease activity seems to make an impact even before the first symptoms present. In the early stages of MS, people exhibit new MRI activity seven to 10 times more frequently than noticeable physical symptoms. Signs of new MRI activity include brain atrophy, lesions and abnormalities in both gray and white matter, inflammation, and nerve damage.

Currently available disease-modifying therapies mostly address inflammation. Inflammation and demyelination are associated with MS and occur at varying rates throughout the course of the disease.

The damaging effects of the early symptoms of CIS and MS have been linked to long-term disease outcomes, including disability. Treatment is best begun during the early relapsing phase. This can slow the growth and worsening of lesions and decrease relapse frequency.

Improved Prognosis for CIS or MS

You may never go on to experience a second occurrence of CIS symptoms, but it is very important to consult your doctor to evaluate your risk of developing MS. An MRI scan can help doctors to see whether there are lesions in your central nervous system that resemble MS. “If somebody even has one additional lesion on their brain MRI at the time of diagnosis,” cautioned Dr. Nicholas, “they have a greater than 80 percent chance, over the next 20 years, to go on to develop MS.”

Studies show that inflammation and damage to the central nervous system are related to CIS and occur throughout the MS disease process. Careful monitoring with your doctor and starting the right treatment as early as possible can help to reduce inflammation and the resulting nerve damage.

Mounting evidence shows that early treatment (as well as earlier diagnosis) yields the best long-term outcomes when it comes to MS. Diagnosing and treating relapsing forms of MS before a person begins to accumulate signs of disability is important. Early treatment presents the best possible prognosis in both the short and long term.

Why and How To Track CIS Symptoms